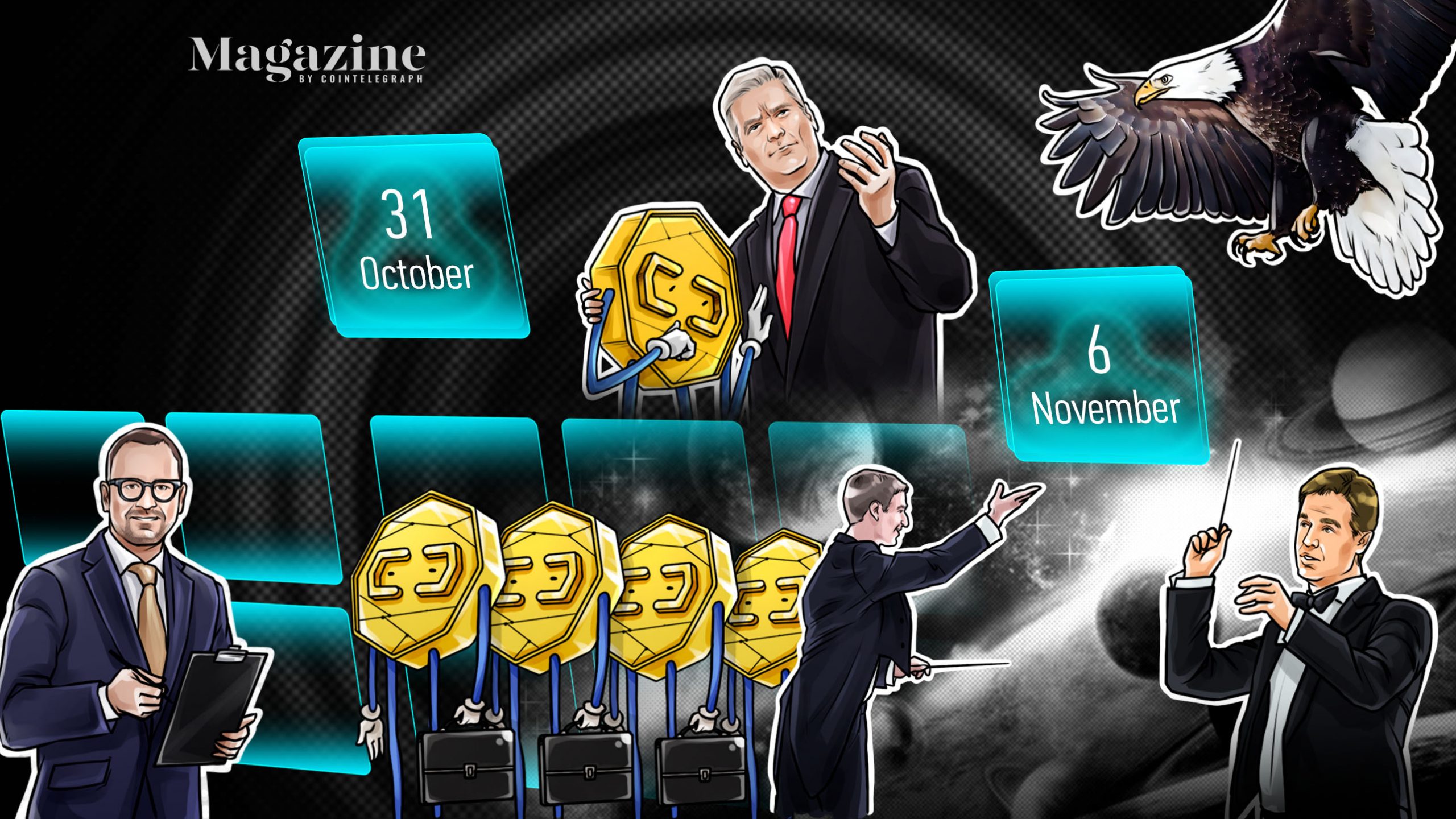 Coming every Saturday, Hodler’s Digest will help you track every single important news story that happened this week. The best (and worst) quotes, adoption and regulation highlights, leading coins, predictions and much more — a week on Cointelegraph in one link.

After Bitcoin’s (BTC) first-ever monthly close above $60,000 for October and a new all-time high (ATH), the bulls are reading the tea leaves to see what November will bring. Plan B — who has been pretty bang on the money in recent months — has forecasted a November close of $98,000 per BTC.

Something that may suggest the asset is on the up this month is that a strong number of holders weren’t tempted to sell despite BTC reaching its ATH of $67,100. Kraken Intelligence pointed out as much, noting that mass accumulation has continued over the past two months despite the potential to reap mad gainz.

“Notably, while long-term holders were unfazed by the retracement last month and used it as an opportunity to continue accumulating, this trend has not changed despite a significant rebound in price to new all-time highs near $67,000,” Kraken Intelligence said.

With Bitcoin looking as good as ever, star NFL quarterback Aaron Rodgers has bravely decided to accept a chunk of his $22.3 million salary in BTC. Unsurprisingly, it was a part of a promotional deal, with Cash App being the method of choice to hodl the BTC.

In a video shared via Rodgers’ Twitter account, the Green Bay Packers legend cited his belief in Bitcoin and its bright future as the reasons for partnering with Cash App, but one would believe it might actually be a part of what some call a “celebrity endorsement deal.” Another brave soul who vowed to accept his salary in Bitcoin this week was Miami Mayor Francis Suarez. The well-known crypto proponent said on Wednesday that he would take his next paycheck 100% in BTC. Suarez said that he would prefer to use an app like Bitwage or Strike rather than make the local government figure out how to convert his fiat paycheck into crypto.

Alphabet, the parent company of Google, splurged $1 billion via an equity investment into the Chicago Mercantile Exchange (CME) Group. The exchange is home to many crypto derivatives products such as BTC futures contracts, micro BTC futures, BTC options, and micro Ether (ETH) futures.

The move was announced on Thursday via a note to CME Group investors. Also announced in the note was a 10-year strategic partnership with Google Cloud aimed at accelerating the exchange’s move to the cloud and changing the way global derivatives markets operate.

Fast Food giant Burger King (BK) signed a “whopper” of a deal this week with retail trading platform Robinhood to give away free crypto to customers who spend more than $5 in November.

The U.S.-based promo campaign is running until Nov. 21, with customers given free crypto primarily in the form of Dogecoin (DOGE). A few lucky customers will even have the chance to win a whole Bitcoin or Ether, but must register with Robinhood Crypto to receive the reward.

The crypto rewards will be drawn from a trifecta of 2 million DOGE, 20 BTC and 200 ETH. Customers can only claim one prize per day and must make their purchase on the BK app, website or in-store using a code at participating locations.

Commonwealth Bank to enable crypto trading for 6.5M Aussies, ‘other banks will follow’

The Commonwealth Bank of Australia (CommBank), one of the local ‘big four’ banks, announced on Wednesday that it is rolling out crypto trading services directly through its banking app. CommBank said it will support 10 crypto assets in total, including Bitcoin, Ether, Bitcoin Cash (BCH) and Litecoin (LTC).

The CommBank app has a user base of around 6.5 million people, and the crypto move is being launched in partnership with the blockchain analysis firm Chainalysis.

Following the bullish announcement, Steve Vallas, the CEO of industry body Blockchain Australia, told Cointelegraph that it is only a matter of time before the other major Aussie banks follow suit.

“It is inevitable that the other banks will follow suit,” he said. “Clarity in the local regulatory landscape is emerging with issues such as licensing being tackled head-on by industry and by governments. […] Impediments to action and participation are being removed.”

For more info on crypto prices, make sure to read Cointelegraph’s market analysis.

“NFTs will be the underlying technology for everything of value on the web. It could be monetary value or it could be personal value. I was mentioning your identity earlier on, so that’s something an NFT could carry for you on the web. It’s going to be invisible.”

“To my surprise, I’ve never seen an industry so keen for regulation. Almost everyone I’ve spoken to in this industry understood that regulation would bring credibility and validity to this sector.”

“My worst nightmare is the discovery of a zero-day exploit in the Bitcoin Core code that no one has discovered yet. Every day that goes by, the probability of this diminishes exponentially — but it will never be zero.”

“The Metaverse, I think many people might be relieved to know, is not going to be wholly owned, administered and orchestrated by Mark Zuckerberg and Meta.”

“In the absence of new legislation, stablecoins remain subject to the concurrent and potentially overlapping jurisdiction of a number of federal and state regulatory regimes. That is why any agreement among the relevant federal agencies about who will take the lead in regulating stablecoins is important.”

“The SEC’s approach to cryptocurrency regulation has been unacceptable. […] If the SEC cannot outline the perceived material difference in risk profiles, then they should allow ETFs based on spot Bitcoin to be traded.”

“We need a special council of representatives from state bodies and private enterprise to craft regulations for cryptocurrencies. The CBI or the Security and Exchange Organization are not qualified [enough] to set rules for cryptos given the multidimensionality of the issue.”

“When this project was started, we had not made as much money in FIDEBITCOIN [state BTC Trust account] as we have made now. So we have decided to make the first 20 Bitcoin Schools.”

Prediction of the Week

Bitcoin ranged in price this week, largely trading between $60,000 and $64,000, according to Cointelegraph’s BTC price index. In terms of future price action, one Twitter account by the name of Ecoinometrics drew up some analysis that suggests Bitcoin could have major upside left for this halving cycle.

Ecoinometrics tweeted a chart overlaying Bitcoin’s current price journey since its 2020 block reward halving against the backdrop of BTC’s price run after its 2016 halving. After BTC’s 2016 halving, the asset grew in price by a factor of almost 30 when it peaked. Seeing as Bitcoin’s price traded at roughly $8,600 around the time of the 2020 halving, it could peak at $253,800 if history repeats, according to Ecoinometrics.

Additionally, based on the logic of ETH’s price activity in tandem with Bitcoin’s halving history timeline, Ecoinometrics forecasts a possible outcome for the price of Ether. The asset could possibly reach a summit of $22,300 per coin based on this idea.

Analyst Willy Woo, alternatively, predicted that this current post-halving cycle is the last major four-year cycle for Bitcoin. If that is indeed the case, and if Bitcoin reaches mass adoption and “full saturation,” the BTC price in dollar terms would no longer be relevant.

FUD of the Week

Earlier this week, it was reported that a law firm based in Queensland was going after a local crypto company that issues a token that can only be sold in batches of $125 per day.

The firm, BPS Financial, and its QOIN token are only supported on the Block Trade Exchange. Users can spend between $100 and $10,000 on QOIN, but the platform reportedly doesn’t allow withdrawals larger than $125 in one sitting.

Salerno Law is planning to file a lawsuit against BPS for engaging in misleading and deceptive conduct, pyramid scheme-style antics, and failing to comply with service regulations.

On Tuesday, it was reported that the trading value of the Jungle Freaks NFT project had tanked roughly 80% after a collection of racist cartoons drawn by one of the project’s creators in the 1970s circulated online.

The creator in question is George Trosley, who rose to fame from his illustration work in Hustler magazine. Trosley’s foray into NFTs was off to a good start until the highly offensive illustrations surfaced, with a rare Jungle Freak NFT selling for 24 Ether ($108,000) just two weeks ago.

Elijah Wood, who played Frodo Baggins in the beloved The Lord of the Rings movies, even had his hands on the “precious” NFTs before the debacle but, upon hearing the news, he liquidated his holdings and donated the proceeds to charity.

“I was made aware of some of the artist’s disturbing prior cartoons,” he said. “Upon learning this, I immediately sold the NFTs as I wholly denounce any form of racism. I have donated the funds from the sale of the NFT to LDF and Black Lives Matter.”

In what appears to be a rug pull of the ages, the SQUID token inspired by the hit South Korean Netflix show Squid Game dropped essentially 100% right after its price topped $2,850 on Monday.

The scammers touted the SQUID token as a play-to-earn crypto inspired by the series’ plot, in which people risk their lives to play a series of children’s games for the opportunity to win 45.6 billion won,  or roughly $38.7 million. But, much like the show, there were serious consequences for “playing.”

The price of SQUID skyrocketed 75,000% in the space of a week. However, users were complaining during the pump that they could not sell the asset due to “anti-dumping technology” deployed by the creators that limited people from selling their tokens against lower demand.

Latinx communities are driving forward adoption, as crypto is proven to meet their diverse needs in a way that traditional finance cannot.

The Bitcoin white paper only has nine pages, yet it contained enough to change the world. Here’s how it came to be 13 years ago.

Beyond the NFT hype: Creating lasting business models for artists

Digital creators and artists have been able to make a living by selling NFTs for high prices, but how long will this business model last?

Bitcoin soft fork days away as Taproot upgrade closes in