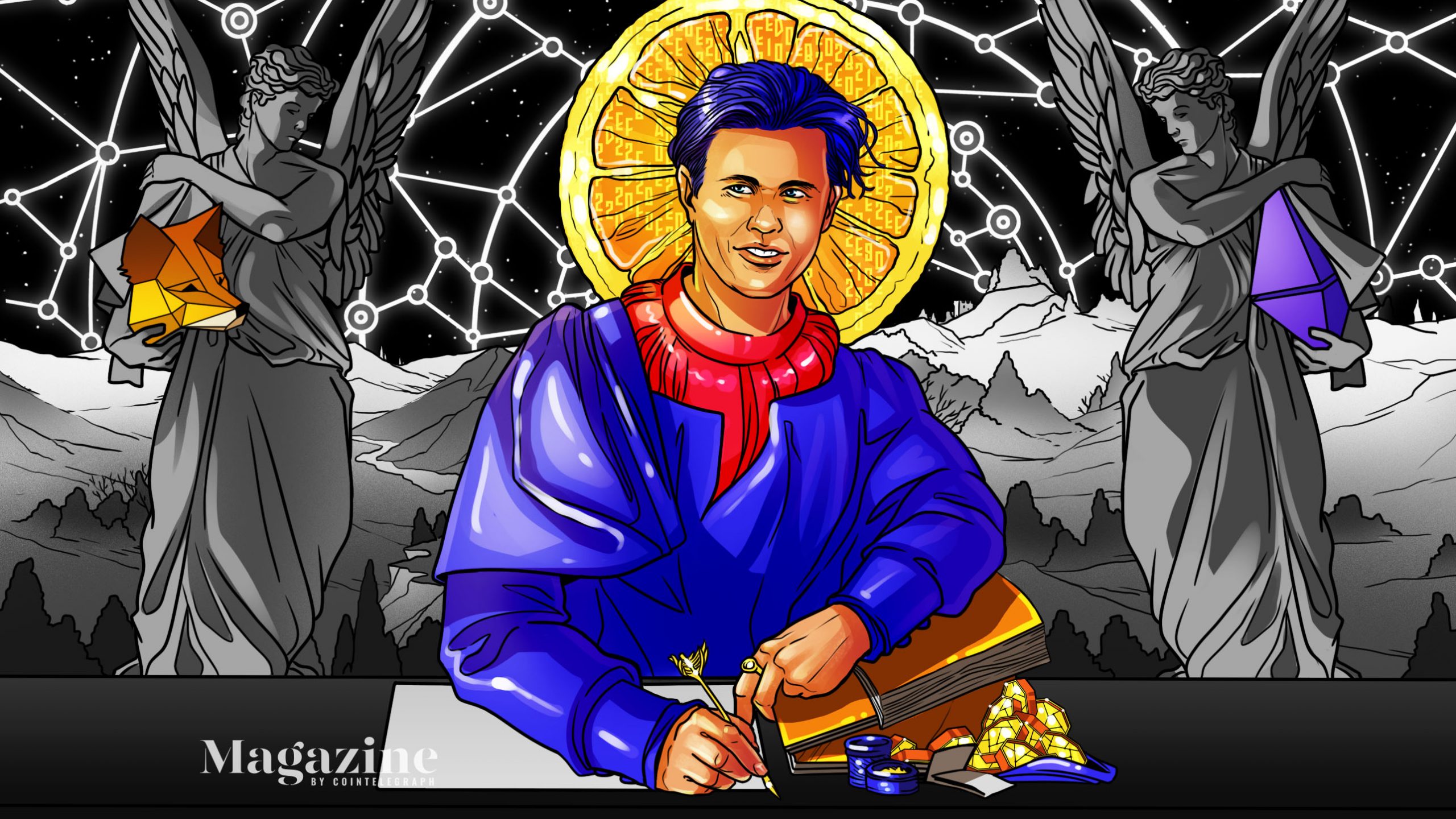 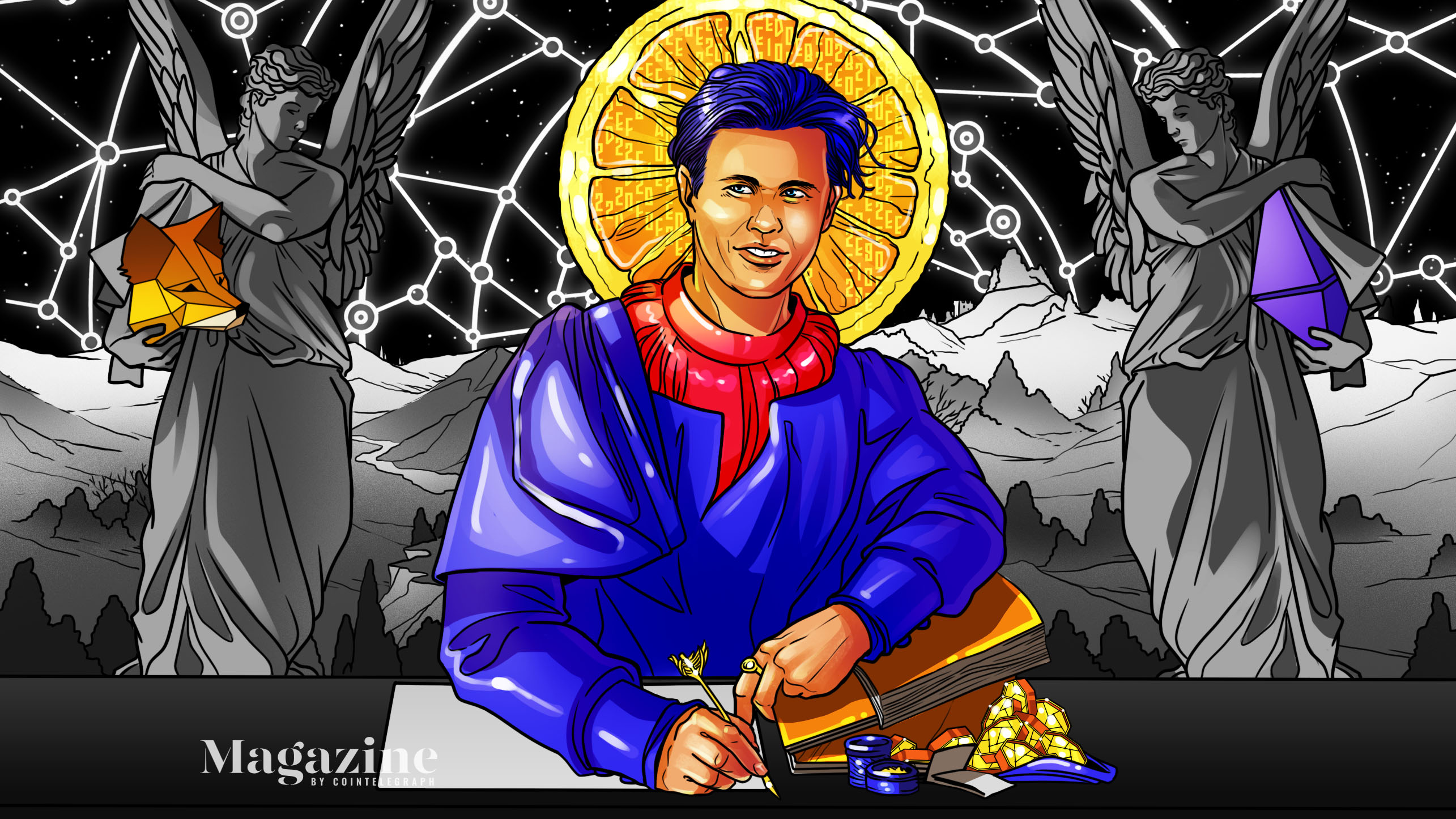 Joel Dietz, founder of Metamask and founding team member of Ethereum, is a romantic at heart. He creates art as ‌“Cryptoapollo” that reflects the intersection between traditional art and technology.

“I have a very classical romantic temperament, which can be hard to bring into the modern world since romantically inclined people can be suppressed in the modern economy, but I also love the cutting edge of technology as it applies to art in architecture and sculpture,” explains Dietz.

“And like any technological enthusiast, I always try and explore the latest tech such as VR. Mostly my art is digital, although I have played around with physical pieces,” he declares.

He is a polymath and a Renaissance man whose passions include the arts, poetry and cryptography. He wears his heart on his sleeve, gets bored easily and is constantly learning.

When he first attended kindergarten as a child, Dietz immediately informed his mother that he wanted to be homeschooled instead. She agreed, and this decision was quickly vindicated.

Dietz started programming computers at age six, won a scholarship to Arcadia University at age 13 to study computer science, and thereafter collected prizes for his programming from Salesforce, Google and Topcoder.

After a brief academic career studying comparative poetry and mythology, Dietz joined the Ethereum team on day one, including creating the first educational channel for smart contracts (EtherCasts), writing the first Ethereum DEVGrant and starting Metamask at Devcon 0 — which was already his third cryptocurrency-related browser extension.

Dietz was also very interested in the evolution of governance and law with respect to cryptocurrencies. He did the first academic work on “crypto economics” at the University of Notre Dame in 2014, ran the first on-chain nonprofit election for the Bitcoin Foundation, created several governance-related protocols that culminated in Swarm Markets — the first regulated DeFi exchange in Germany — and co-organized the first conferences on law and cryptocurrency at Harvard and MIT.  He is currently a Connection Science fellow at MIT and an industry adviser at Notre Dame.

His latest projects include a recently launched layer-two solution for the NFT industry called ArtWallet, which currently trades with a $600-million market cap. He is also working on a platform for building metaverses called the Meta Metaverse — which he started before Facebook rebranded to Meta.

I am looking for VCs that might understand the meta metaverse. Anyone come to mind?

His academic research interests focus on the confluence of blockchain network topologies and swarm intelligence (self-organizing systems), especially how the principles underlying decentralized organizations can be used to fuel global innovation. He also works on holonic philosophy (how biological and social systems cohere), the evolution of jurisprudence (history of law), data-driven approaches to innovation, and smart city data architecture.

Dietz dated a sculptor, Marianna Costi, which influenced his appreciation of physical art. He also became a model for her fresco painting, akin to Archangel Michael in Florence, which remains to this day on a wall in an unnamed church in Italy.

“I brought this appreciation of sculpture in 2014 to a Burning Man festival, where I designed and commissioned and created a giant metal sculpture, like a Spartan warrior mask, for my first large steel installation art,” he recalls.

“Philip Glass had, in turn, been inspired by the Egyptian Book of the Dead, and I am not alone in being interested to see how we can connect to ancient Egypt and its teachings,” he says.

Dietz has dabbled in poetry too, producing a book called Monkey Love in a tribute to a woman he was wooing at the time.

“It was, in the end, a failed romance, but the poetry reflects the free-spirited nature of my paramour. I think poetry is a way to delve into the details of feelings.”

And so, on to holon systems, which can be likened to the human body — where different, autonomous organs act together as a whole. Dietz uses it to describe elegant organizational design. His research culminated in an academic book, which is free to download from Academic.

“How we make decisions, even at the cellular level, is complex,” he says. “Philosophically, we may think of ourselves as autonomous individuals, but we also exist as part of larger social organizations, from family groups to towns to nations. I see it as a series of nested systems that each have their own degree of complexity.”

As a logical extension, Dietz sees the libertarian movement not rejecting overarching authorities — such as the Catholic church, for example — but rather asking people to look at how they participate, either consciously or unconsciously, in different organizations.

Dietz reckons that John Locke, the Enlightenment philosopher commonly known as the “Father of Liberalism,” was indeed hostile to totalitarian mechanisms that forced people to act without self-reflection on their activities.

“Self-reflection is key to understanding how we act and how we can optimize our participation for the best good of ourselves.”

“It’s an anti-war allegory where two people live on either side of a wall and butter their bread on the opposite side of a slice of bread to their neighbor. The argument escalates into a feud from cross words to stick and stones, to bigger and bigger weapons,” Dietz explains.

“The pointless escalation of aggression can be tempered if we can step away from those pointless violent tendencies which have not been great for the evolution of this planet — and reflect on our participation.”

Like most of Dietz’s passions, his interest in cryptocurrency was fostered by another distinct love: his interest in the history of ciphers.  He explains that the founding director of the National Security Agency formalized the study of ciphers during the Second World War and into the Cold War. But Dietz, in turn, was influenced by the American author Edgar Allen Poe and, in particular, by his short story “The Gold Bug,” which features hidden treasure and clues.

“In fact, the concept of number theory, upon which modern cryptographic systems are based, is totally unproven. The random idea in number theory that states that prime numbers do not have patterns is not proven — it’s a working hypothesis at best.”

Working on unproven mathematics leads to applications that may also be unproven, according to Dietz.

For all his ability to see around corners, Dietz was initially skeptical about Bitcoin. When he read the first technical papers, he felt it was going to remain a nerd currency and not have mass application.

As he saw more and more projects fighting to survive, especially other forms of digital currency, he gradually saw that the new enemy was regulation — for anyone trying to transfer money.

He sees the fight as being between old money and old people and new money and young people.

“Kids are going to build cool things. They are going to build increasingly sophisticated platforms and applications. Now, I don’t expect it to be all plain sailing — quite the opposite. It’s going to have issues on steroids because everything is moving so fast.”

Dietz is now well embedded with NFTs and has an agency, 1ofONE, that represents a bunch of celebrities. Recently, he managed the Mike Tyson drop, which proved very successful, and he is excited about the speed of development.

This white-glove service was run on OpenSea, with Tyson collaborating with well-known digital artist Cory Van Lew. Dubbed “The Baddest NFT Collection on the Planet,” it captured some of Tyson’s most formidable moments in the ring. Eleven unique one-of-one NFTs were minted alongside six regular NFTs, with mints ranging from 50 to 250. Launched at the beginning of September, the one-of-ones sold out in an hour at not less than 5 ETH each, and Tyson promises “bigger and badder” drops to come.

“It’s largely a speculative art frenzy, but it is raising awareness,” says Dietz. “Over time we’re going to bring in many more layers. including economic models, insurance, bankable assets — basically, second-generation versions of this tech.”

“To my mind, the next step is to open up the infrastructure and to allow easy access to traditional media and the entertainment industry.”

Dietz is often described as someone who provides a bridge between seemingly disparate elements. In his new layer-two project, ArtWallet, he pairs physical items with NFTs. One such interpretation planned is a car wrapped by an artist twinned with an NFT. The ArtWallet project currently has a $600-million market cap, and he is also working on his metaverse-building Meta Metaverse platform.

As always, there are about 50 business plans on his desk waiting for his attention. He sees his value as sprinkling fairy dust on projects, and he only gets interested in projects with serious CEOs and teams.

“I can really only scale up one project at a time. I am also happy being a little bit dark too. Like when I was building Metamask, we didn’t need to be in the public eye.”

Like most serial entrepreneurs and cyberfuturists, Dietz has so much waiting for his attention. Once, in a bid to beat the clock, he tried to do without sleep, staying awake for two days in a row — but that played havoc with his health. Now, he keeps on his game through diet and exercise.

“I am very competitive, but I like to go at a measured pace, like a metronome. If you were to put a term on me using musical composition, I’d be the allegro section.”

The ‘weight of money’ means crypto can’t be ignored