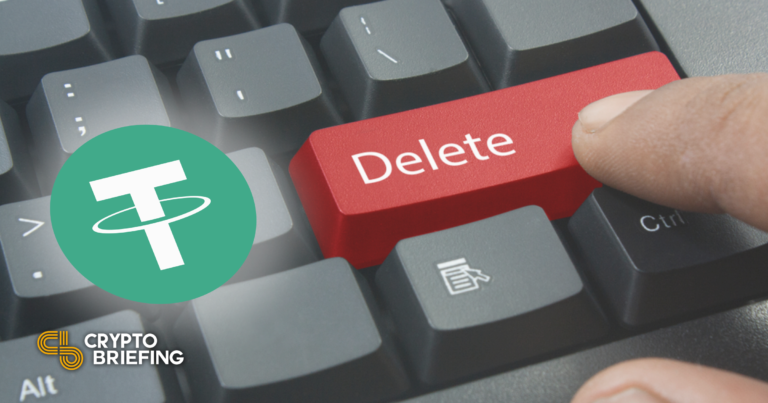 The Twitter account belonging to Tether’s CEO was deleted today.
The deletion occurred shortly after Bloomberg published an investigation into the company’s USDT reserves.
The CEO’s last statement read “stay tuned” which implies that the company will engage with Bloomberg.

The Twitter account belonging to Tether’s CEO was deleted today following a controversy over the USDT stablecoin.

Van der Velde’s account was previously located under the handle @urwhatuknow. His last tweet, published on Oct. 4, is still available as an archived page and anticipated the content of Bloomberg’s article by several days. That message reads:

[A]nother financial enslaved dying magazine trying to come up with some #Tether FUD in order to bring in some bucks and delay its extinction for a few more days, stay tuned…. #dinosaurs

Even before his account was deleted, Van der Velde remained extremely elusive. Some have questioned whether the CEO exists or whether the name is merely a pseudonym.

Though at least some media featuring the CEO has been found, Van der Velde has largely not engaged with the public on matters pertaining to Tether and its sister company Bitfinex.

Does the Deletion Indicate Trouble for Tether?

While Tether’s harshest critics believe that the company is on the brink of collapse, it is unlikely that such an extreme outcome will result from Bloomberg’s exposé, especially given that Tether has survived various controversies in the past.

It is possible that Van der Velde’s account was deleted in order to avoid conflict on Twitter. If Bloomberg’s piece prompted hostile messages, Tether’s CEO may have deleted his account for personal reasons. In fact, today’s deletion resembles a 2019 incident in which Craig Wright of Bitcoin SV disappeared from Twitter following a massive controversy.

Yet given Van der Velde’s low profile, it seems unlikely that he would be personally targeted by anti-Tether groups. Furthermore, other Tether executives, such as CTO Paolo Ardoino, remain active on Twitter.

Tether May Retaliate Against Bloomberg

Last year, Coinbase preemptively responded to a New York Times article criticizing its racial policies. In another incident, Binance sued Forbes for defamation over a report on its regulatory tactics.

In this case, it seems likely that Van der Velde (or someone managing his account) deleted past statements in order to prepare a clean slate for a fight against Bloomberg, as implied in his final tweet.

It is possible that Tether plans to publicly respond to Bloomberg, or that it plans to challenge the media outlet in court. The latter possibility is merely speculative at this point.

Update: Tether has responded to Bloomberg on its blog. This article will be updated if further statements are published.

A Bloomberg investigation has claimed to have found that Tether holds billions of dollars worth of Chinese commercial paper. Bloomberg Investigation Raises New Concerns Today, Bloomberg BusinessWeek reported that stablecoin…

The world’s largest stablecoin provider, Tether, is facing a criminal probe from the U.S. Department of Justice following allegations that the company committed bank fraud. Tether Investigated for Bank Fraud …

How to Trade Using the Inverse Head and Shoulders Pattern

Tether has released the breakdown of its Consolidated Reserves Report, revealing that the majority of its reserves are made of low-risk, liquid assets.  Tether Discloses Reserve Assets   The disclosure statement…

Why Are NFTs Valuable? | Crypto Briefing

Vitalik Buterin: “Ethereum Depends Less on Me Than Ever”

All $250M in bearish bets for Friday are underwater