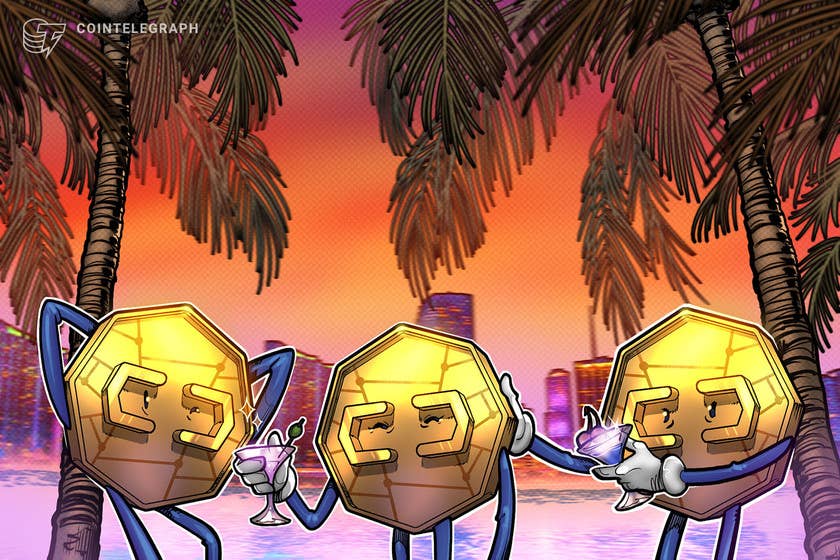 Miami Mayor Francis Suarez has been celebrating the success of a recent initiative to fund municipal projects through the proceeds of a city-specific crypto protocol built atop the Bitcoin blockchain.

On Sept. 13, Miami’s city commissioners voted to accept funds generated by a new cryptocurrency, MiamiCoin, which was launched in August by CityCoins. The coin is built on Stacks, an open-source network of decentralized applications and smart contracts that use the Bitcoin blockchain as a programmable base layer.

Hard-coded into MiamiCoin’s protocol is the requirement that 30% of all coins mined are routed to a digital wallet designated for the city. Those funds will be earmarked for spending on projects such as projects to mitigate the risks of climate change, funding initiatives for underprivileged communities, and investing in crypto education for tech entrepreneurs.

Fox Business estimated last week that roughly $2,500 worth of Stacks (STX) at its then-value of $1.50 were being transferred into the city’s wallet every 10 minutes. In an interview with Fox on Monday, Mayor Suarez confirmed the ballpark figure, stating that mining proceeds generated over $2,000 every 10 minutes and “over 5 million USD over the last 30 days.”

In voting to accept the funds raised since August, the Miami City Commission did not vote to spend them yet. Instead, it accepted the United States dollar equivalent of the proceeds and will hold them in reserve for future municipal spending. Conversion into fiat currency ensures that the city does not custody cryptocurrency directly. In his Fox interview, Suarez said of the initiative:

“It’s interesting because it’s not an involuntary tax, it’s not philanthropy, it’s something that is completely different and could revolutionize the way governments are funded in the future.”

He added, “It’s theoretically possible that the city could generate enough taxes through MiamiCoin so that our residents don’t have to pay one cent in tax.”

Other metrics appear to indicate that Miami has been attracting more tech job postings over the summer, according to data shared by Antonio Delgado, vice president of innovation and technology partnerships at Miami Dade College:

It’s great to see #Florida as the #1 state with the largest increase in tech jobs and #7 in AI job postings from 8/2020 to 7/2021. It’s even better to see #Miami in the Top 10 for #tech jobs postings change in metro areas. #MiamiTech is going for more and @MDCollege is ready! pic.twitter.com/24jrNz11RX

In line with Mayor Suarez’s numerous pro-crypto initiatives, a Miami-Dade County commissioner backed a resolution this spring aiming to allow residents to use cryptocurrencies like Bitcoin to pay local taxes. The mayor had proposed an official resolution that would see Bitcoin become an acceptable payment instrument in various parts of the city’s administration in February. The commission agreed to study the proposal’s feasibility, rather than to take immediate steps to implement it.