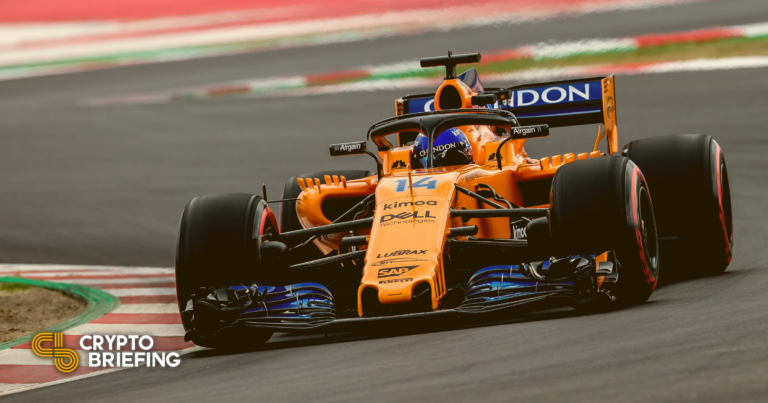 McLaren Racing is partnering with Tezos to build an NFT platform for fans. It will include the team’s Formula One, INDYCAR, and esports pursuits.
The Formula One team selected Tezos as its partner because of the blockchain’s low carbon footprint.
McLaren Racing team members will wear Tezos branding at Formula One races.

Another Formula One team joins the NFT rush.

McLaren Racing is getting into NFTs.

The popular Formula One team has partnered with Tezos in a multi-year arrangement to create a fan-focused NFT platform. The project will involve McLaren Racing’s Formula One, INDYCAR,  and esports ventures.

According to the press release, McLaren has selected Tezos based on its energy-efficient capabilities. The blockchain uses a Proof-of-Stake consensus algorithm to process transactions, which consumes far less energy than Proof-of-Work networks like Bitcoin (Ethereum also currently uses Proof-of-Work, though it has plans to merge to Proof-of-Stake sometime this year). The Proof-of-Stake mechanism allows Tezos to operate with a low carbon footprint, meaning it can efficiently mint NFTs.

NFTs, otherwise known as non-fungible tokens, are tokenized assets that live on a blockchain like Tezos. They can encompass digital art, music, digital trading cards, memes, tweets, and just about anything else on the Internet (they sometimes have a physical representation such as a painting too). As the data for an NFT gets recorded on-chain, each token offers provable ownership and scarcity of an asset. NFTs have faced some criticism over the environmental impact of Proof-of-Work, though Tezos offers a solution to that problem.

NFTs have proven popular in Formula One and many other sports this year. Red Bull Racing announced a partnership with Tezos last month; the team also selected the blockchain for its energy efficiency. Meanwhile, Aston Martin’s Formula One team have taken steps towards crypto adoption, signing a sponsorship deal with Crypto.com in March.

Full details of McLaren Racing’s platform are yet to be revealed, though the team’s Director of Licensing, e-commerce, and esports said that the partnership would center on the Formula One team’s fans. She added:

“At McLaren we are known for putting fans at the heart of everything we do, and this is another partnership which allows us to enter a space where fans can own key pieces of our team. We are looking forward to launching the platform with Tezos to create bespoke NFTs with our Formula One, INDYCAR, and esports teams.”

As part of the partnership, the team’s race suits and drivers will include Tezos branding.

Hubertus Thonhauser, chair at the Tezos Foundation, added that he was excited to work with a team with “one of the longest and most illustrious legacies in Formula One,” noting that brands will need to embrace blockchains to stay at the cusp of innovation.

McLaren Racing was founded in 1963 and has been a leading Formula One team for close to six decades. It’s won the championships 20 times.

The Formula One team has selected Tezos for its first NFT release. Red Bull Racing Team Eyes Tezos  Red Bull’s Formula One racing team is partnering with Tezos, it was…

Aston Martin’s Formula One racing team now counts Crypto.com as one of its sponsors. Crypto.com Headed to F1 Crypto.com confirmed that it had signed a multi-year deal with the luxury…

Bender Labs is launching a new token and protocol to incentivize the use of a new bridge between Ethereum and Tezos. Wrap Protocol Bridges Ethereum, Tezos Wrap Protocol allows users…

Wedbush Will Use Paxos Network to Settle Stocks

Rogue states dodge economic sanctions, but is crypto in the wrong? – Cointelegraph Magazine