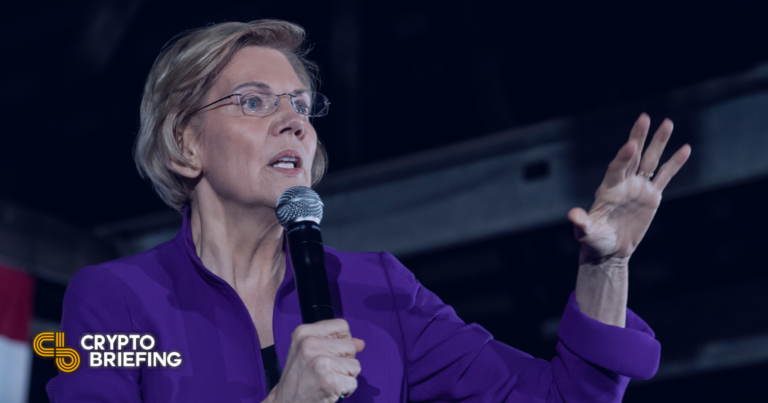 Senator Elizabeth Warren slammed Bitcoin’s energy consumption during a Senate Banking Committee hearing on the potential development of a CBDC.
Crypto’s loudest critics often point out the environmental impact of Proof-of-Work, but more efficient Proof-of-Stake currencies have emerged in recent years.
Despite the recent focus on Bitcoin’s energy usage, El Salvador and other Latin American countries are showing clear support for crypto.

Senator Elizabeth Warren joined the Bitcoin environmental debate during a discussion about the potential development of a CBDC.

The U.S. Senator Elizabeth Warren has spoken out against cryptocurrencies.

Bitcoin requires so much computing activity that it eats up more energy than entire countries. One of the easiest and least disruptive things we can do to fight the #ClimateCrisis is to crack down on environmentally wasteful cryptocurrencies. pic.twitter.com/derGr1bjuq

Speaking at a Thursday Senate Banking Committee hearing to discuss the potential development of a central bank digital currency (CBDC), Warren attacked Bitcoin and other cryptocurrencies with many of the same criticisms central bank officials, environmentalists, and other crypto skeptics often lean on.

These include crypto’s popularity among criminals, the price volatility of the assets, and the environmental impact of Proof-of-Work. Warren highlighted the “dangers cryptocurrencies pose to [the] economy,” making specific reference to cyber attacks like the recent Colonial Pipeline incident, and the price volatility of assets like Dogecoin. She said:

“Every hack that is successfully paid off with a cryptocurrency becomes an advertisement for more hackers to try more cyberattacks.”

Warren also took aim at crypto’s energy usage, using Bitcoin as a leading example. She said that “cryptocurrencies like Bitcoin are terrible for the environment,” before comparing the leading asset’s energy consumption to other countries. She noted:

“Bitcoin consumes more energy than entire countries and it is projected to consume as much energy as all the data centers in the whole world this year.”

Bitcoin uses a consensus mechanism called Proof-of-Work to verify transactions. Miners around the world solve complex puzzles and earn a reward for adding a new block to the chain. Proof-of-Work requires vast amounts of computational power—a Cambridge study found that Bitcoin uses about as much energy as the Netherlands.

Many crypto enthusiasts have argued that roughly 75% of Bitcoin mining comes from renewable energy sources, but this hasn’t done much to sway the asset’s biggest critics. Warren and other skeptics tend to focus on Bitcoin when they discuss crypto’s environmental impact, but many more energy-efficient currencies have emerged as the asset class has evolved. A popular alternative consensus mechanism to Proof-of-Work is Proof-of-Stake. Many newer projects use the less energy-intensive Proof-of-Stake today, including the likes of Polygon and Fantom. A recent Ethereum article found that Proof-of-Stake could reduce the blockchain’s energy usage by 99.95%. It’s due to merge to the new algorithm later this year.

Warren isn’t the only public figure to have taken a hard stance against Proof-of-Work in recent weeks. Last month, Elon Musk announced that Tesla would stop receiving Bitcoin payments, citing environmental concerns. The move sent shockwaves into the market and helped Bitcoin and other assets tumble.

Bitcoin has seen a wave of corporate adoption over the last year, but since Tesla’s announcement, many have pondered whether ESG concerns will dissuade other major companies from joining the crypto rush. However, the environmental issues haven’t put everyone off Bitcoin. Spearheaded by President Nayib Bukele, El Salvador became the first country to make the asset legal tender yesterday. After the historic vote was passed, Bukele announced that the country would begin offering Bitcoin mining facilities using renewable energy from volcanoes. “This is going to evolve fast,” he said.

Many other Latin American leaders have shown support for Bitcoin since Bukele detailed his plans to use the asset as legal tender. If the U.S. follows Warren’s direction, it could be Latin America that takes a lead in mass crypto adoption.

Ethereum will reduce its energy consumption by 99.95% following its transition to proof-of-stake, according to a new blog post from Carl Beekhuizen of the Ethereum Foundation. How Much Less Energy…

Ethereum “Has to Expand” Beyond DeFi: Vitalik Buterin